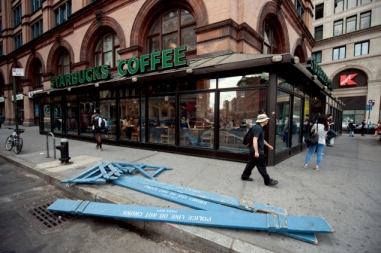 The violence was planned and went on for some time. People showed up in masks with 8 foot long pipes! A couple of policemen were injured.

Three men, all with “Occupy Wall Street,” were arrested.

The three were part of a group of 25 people – some of them masked – carrying 8-feet-long galvanized metal pipes, using them to vandalize commercial properties, cops said.

The group carried on and marched against traffic into the streets near Washington Square Park after leaving the Fifth Annual New York City Anarchist Book Fair at Judson Church on Washington Square South, police said. They began chanting “F— the NYPD”, “All pigs must die,” and “Cops are murderers’, officials said.

Does anyone else remember 1968?