This all makes me physically ill. Documents withheld for over 3 years. 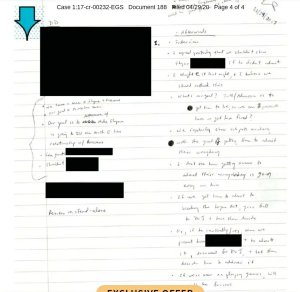 Hand written note “get him to lie.”

Special ProsecuterMueller’s investigation had some of these documents. Did Horowitz?
I have said that justice died the day that Kelo was decided and Terri Schiavo was killed by medically pulling her feeding tube & threatening her mother with Sheriff’s deputies guarding her to ensure dehydration.

Then, Comey pulled his Hillary stunt and the DOJ handed out immunity like candy. Then, the Russia hoax, and impeachment with Schiff claiming ownership of interview documents.

Law enforcement forcing the elderly to sit on sand rather than beach chairs and parents arrested for playing with their own children.

Now FISA courts subverted, 66 yo’s are arrested in their homes in SWAT assaults, and this, with Flynn. The FBI leadership planned to go after Flynn, in order to prosecute or get him fired.

Then, the documents and others proving the plan were held – hidden – for over three years in spite of a judge ordering them turned over.

The real story is the lies they told, and especially the fact that they hid these documents 3 years after they were ordered by a judge to turn them over!

They didn’t appeal the judge’s rulling: they obstructed justice, hiding and denying their existence! The Sztrok/Page texts were supposedly destroyed, remember? Then some were turned over as if the complete record.

Justice is dead and the body has been repeatedly mutilated.