RSS feed for this section
This category contains 2 posts

Even failed “progressive” actions by US legislators are rarely, if ever, reversed. Often, they enable broader progressive changes. 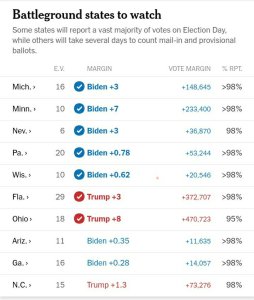 As I write this, it’s nine days after the 2020 election and we still don’t know who will be inaugurated as President of the United States. In spite of the precipitous “calling” of the election by the AP an other media for Joe Biden, the actual result is not a given due to close votes in several States. Lawsuits and recounts will likely play out at least until the day of the Electoral College vote, December 14, 2020, if not beyond.

Georgia officials have announced that they will conduct a recount and audit of the vote in that State because the difference in the Presidential election votes is about 0.2%. There’s a chance that the State will determine who will be sworn in on January 20, 2021.

But the biggest impact for the State may be as a result of another election. (Or, technically, two elections.)

On January 5, 2021, the State of Georgia will hold a run off election to determine both of their Senators. Currently, it appears that both races can be handily won by the Republicans if they turn out as they did on November 3, 2020.

(Each race had several candidates and Georgia requires a majority to win. Republican John Purdue beat Democrat Jon Ossof 49.7% to 48%.

While Republican Kelly Loeffler only received 25.9% of the vote in the Special Election compared to the 39.2% won by Democrat Raphael Warnock, the other Republicans in the race bled off Loeffler’s votes have endorsed her, including Doug Collins, who had 19.9% of the vote.)

In the event that Joe Biden wins the Presidential election each of us, regardless of Party affiliation, should ask ourselves whether the current crop of Democrats can govern without turning our Nation over to the chaos that is the status quo in many of the cities they already govern.

In addition, it’s imperative to remember the consequences of compromises and the influence of the Left on policies of the future.

Take an example from my profession: 1993’s “HillaryCare” debacle. Hillary Clinton’s plan to centralize health care to impose universal, single-payer government financed health insurance failed due to closed door meetings and a chaotic lack of political planning. It still resulted in SCHIP, HIPAA, the Balanced Budget Act of 1997 that removed all privacy from medical records and forced utilization of mid-level medical personnel as employees of “providers,” the ridiculous idea that cutting numbers of physicians by restrictions on funding for residencies would save money for Medicare, and ultimately, ObamaCare.

The Republicans have already won 50 seats, at least, but that is no majority and ties would be settled by the vote of the “President of the Senate,” the Vice President of the United States. In the event that Biden is the final winner of the Presidency, those ties would go to Kamala Harris – or her VP after Joe resigns or is unseated.

It’s a cliché that we’re likely to hear slot in the next 2 months, but do keep Georgia on your mind.

I hope you can recall this

The future includes so much more than a 10 year old video, for people who don’t have memory problems.

Forget the Clinton’s sale of nights in the Lincoln Bedroom and misplaced furnishings from the White House and, later, the State Department offices. Go ahead, laugh at the “Reset button.”

But don’t forget the pay-for-access that continues to this day. Please don’t dismiss Clinton’s complicity with the sale of US uranium and her own dismissal of the deaths of four Americans at Benghazi or of “our posterity” in the case of the unborn children whose lives are ended by elective, intentional abortion.

These recollections make a difference today and for the future.

What place will there be in a Clinton II Administration for people who oppose abortion or who prefer to continue to include “under God” in the Pledge of Allegiance? Can we tolerate another 4 years of IRS discrimination against conservative non-profits? Do we need to have more lawsuits against nuns or regulations forbidding Christians from praying in the name of Jesus?

We certainly won’t be invited to any closed door meetings on HillaryCare. And there’s no telling how many boxes of FBI files and billing records will disappear never to be “recalled” if Clinton gets another shot at the White House.

I would much rather hold Donald Trump to his promises than watch Hillary Clinton keep hers.