This tag is associated with 3 posts

Who is our John Galt? 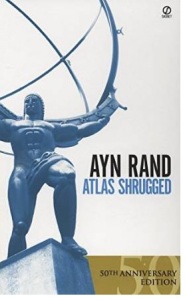 However, with modern satellites and other methods of surveillance, I don’t think there’s any place on earth to build our own Galt’s Gulch, the mythological hideaway that Ayn Rand described in her novel, Atlas Shrugged.

We’re going to have to look for the man rather than the place, after all.

While Galt had some good ideas about production and the free market,  he scoffed at altruism and self-sacrifice.  In his world, the solution he advocated the withdrawal of our talent and gold from society and to let civilization collapse.

And yet, Galt’s actions were not completely consistent with his words. He gave up safety, comfort and wealth in order to win converts and enable the “producers” to escape the tyranny of his government.

From Galt’s speech explaining why his actions were not a sacrifice:

“If a man refuses to sell his convictions, it is not a sacrifice, unless he is the sort of man who has no convictions.”

Okay, hunker down in the bunkers, y’all.

There is truth to be found in the multi-page soliloquies in Atlas Shrugged, Ayn Rand’s opus that has won over readers in generation after generation. John Galt’s philosophy appeals to individualists and is rooted in classic liberalism that we now call libertarian or conservative.

But where Rand excelled was as an excellent observer of statism and socialism, as well as faithfully reporting the justification made by the proponents of each. Since reading Atlas Shrugged in the mid-1990’s, I’ve heard and read adults make the very claims that some of Rand’s characters make about the duty of producers and employers and the “rights” of the people who want benefits without obligations and who are willing to use the  power of guilt, class warfare and greed to control both.

However, Rand’s objectivist libertarian philosophy goes too far. She was anti-religious, anti-altruist,  pro-abortion and left her husband in order to live with a much younger man who was also married. In fact, her portrayals of relationships between men and women too often resemble warped rape and dominance games. Her earlier book, The Fountainhead, includes a controversial scene that Rand is said to have described as, “If it was rape, it was rape with an engraved invitation.  Fifty Shades of Gray from the ’50’s?) The fact that John Galt would hide away with fellow rich, intelligent and successful elites in a remote enclave and allow the rest of society to self-destruct is selfish and impractical.  (Rand herself certainly didn’t attempt to “go Galt.”)

If you want to understand today’s political debate, I believe you must read  Atlas Shrugged. The beginning is online, here.

A little philosophy, a lot of optimism

I sometimes forget that libertarianism is one step away from  anarchy, and that anarchy is  one step away from nihilism. But a nice little online chat with objectivist (Ron Paul supporter) will remind me almost every time. On the same page blaming “Zionists” and a couple of posts past reminding me that Ayn Rand should be my conscience, I am told that we are due for an “upheaval” resulting in war or a dictator, and that America is a failed state.

America is not a failed state. We are a Nation of individuals with infinite possibilities. I do believe that necessity is the mother of invention and that a free United States will continually prove that.

The nihilist asks what good is there in defeating an enemy? It’s a whole lot better than losing and history shows that if you don’t win, you risk losing both the war and your soul.  We saw Chamberlain give up Czechoslovakia for “peace in our time” and Vichy France betray not only the French, but the Jews.  And then, we saw Churchill resolve never, never, never to give in and even Truman and his decision to end the war with Japan by dropping nuclear bombs.  I’ll stand with the latter two men.

I’ve posted a couple of blog pieces wondering whether we are at the “de Tocqueville moment,” that point in a democratic state when the majority takes from the minority that de Tocqueville warned us about.  I don’t believe we are. What it comes down to is that this time, the individuals who understand history and inalienable rights are outside the gates, fighting to get in, rather than the barbarians.

Here’s a fitting quote from Sir Winston: ““Courage is going from failure to failure without losing enthusiasm.””