Independence or slavery: Does the government own you?

Liberty is not simply the freedom to act, it’s the more fundamental freedom not to act. Remember the proverb that “The right to swing your fist ends at the tip of my nose?” True liberty includes the right *not* to make a fist at all. To force the hand of a person against his will other than to defend the higher-priority right to life is to enslave him.

The same sex marriage ruling and protected status for “sexual orientation” is the latest socialist infringement on the inalienable right to liberty. In the name of “equality,” “fairness” and even “liberty,” they attempt to give government the ownership of all property and the means to earn it.

In particular, they demand that people of conscience either deny their faith or get out of government and public activities, including business and earning a living. (For real life examples, read the earliest few comments, here.  Or here.)

People who want what they want, when they want it, and from whom they want it seem to have no problem forcing other citizens to act against their will. In order to devalue the right of conscience and religion they deny the rights in the First Amendment of the Constitution – or the very existence of inalienable rights at all.

The Board of Labor of Oregon just gave us a perfect example just this week. Brad Avakian, the judge in the Sweet Cakes Bakery case, has slapped the couple with a gag order.  He would deny them free speech as well as the free exercise of their religion. 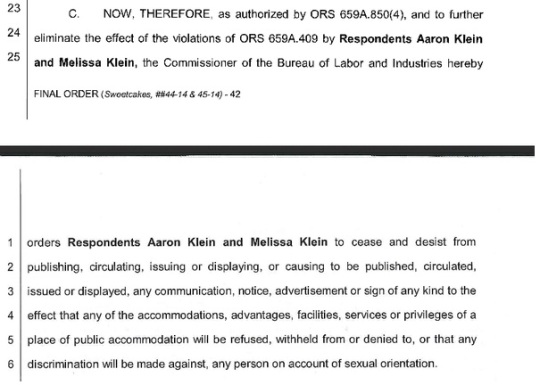 Here’s the justification for that order.

(Thanks to Kelsey Harkness!)

The Supreme Court of the United States, States and local governments cannot create a world of gumdrops and lollipops, where everyone likes everyone and everything they do. There is no right not to be inconvenienced, much less the right not to be offended. The right to liberty of anyone may not be infringed for the benefit of another person’s pursuit of happiness without significant distress to society and government.

Read the Declaration of Independence to see what happens when governments attempt to do so.