This tag is associated with 2 posts

Today is the one year anniversary of mob and chaos that Leticia Van de Putte and Wendy Davis initiated and encouraged when the Texas Senate began to vote on a law to prohibit abortion after 20 weeks and require doctors who perform abortion to have privileges at a nearby hospital and to use the FDA guidelines that they agree to use before becoming eligible to This was the response of one woman to prayer and a crucifix last year at the Texas Legislature.

The women were following the leader of a man who shouted, “Whose choice?” by chanting “My choice.”It strikes me as odd that every time I witnessed one of these chanting/response sessions, a man was leading the women. That’s not the version of feminism I expected.

This picture came from a video that I took on July 2, during House testimony on HB5, which later became law prohibiting abortion after 5 months and protecting women who chose to undergo abortion. 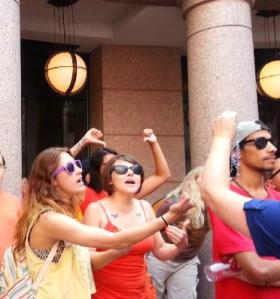 Watch Representative Sylvester (District 139) Turner question Dr. Mikeal Love (that first name is Greek) about whether or not abortionists have hospital privileges. Contrary to the statement by the Counsel of the Texas Hospital Association, Dr. Love reports that 2/3 of Texas abortionists have hospital privileges. Mr. Turner has a real problem understanding the emphatic confirmation that there are doctors whose primary practices are abortion and yet, do indeed have privileges at hospitals.

Representative Helen Giddings, District 109, also tried to trip up Dr. Love, but she only gave him more time to #Stand4Life. She becomes confused and asks whether all Obstetricians/Gynecologists are abortionists, since they all do D&C’s. (The D&C is the method of abortion, but not all D&C’s are abortions.)

Ridiculously, Sylvester Turner ends the questioning of Dr. Love by repeatedly asking whether Dr. Love was paid to give his testimony. Dr. Love answers, “No,” and then is asked again. Wonder if this is a case of a liberal accusing conservatives of doing what liberals are doing?

(I only wish I could speak as well as Dr. Love! I definitely enjoyed watching him debate for life!)