Have y’all been following the insult to Former Marine Dan Moran by Katrina Pierson? She called him “deformed” and said he is being exploited because he endorsed Lieutenant David Dewhurst for Texas Senate. Here’s the archived page. 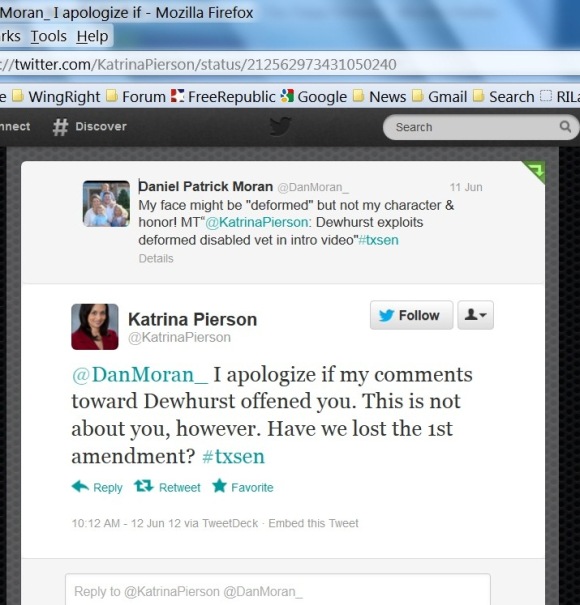 (I received the whole thing through retweets, since I blocked Pierson on Sunday, before all of this happened.)

Follow @danmoran on Twitter to see his side of the conversation. Pierson deleted the “offening” comment on her account.
The Twitter debate continued for a few hours, and caught the notice of Texas’ press, including the Austin American Statesman and the Texas Tribune, where Cruz is now demanding that the Dewhurst campaign apologize to Pierson. He posted similar comments on his website, claiming that it’s paid staffers, rather than those of us who are voluntarily supporting Dewhurst. Like Captain Moran and Katrina, we are all independent agents able to decide what we do, without being “exploited.”

Here’s Katrina’s “apology:” “”Katrina Pierson ‏@KatrinaPierson @DanMoran_ I apologize if my comments toward Dewhurst offened you. This is not about you, however. Have we lost the 1st amendment? #txsen “”