During the Friday night televised debate between Lieutenant Governor David Dewhurst and Ted Cruz, Cruz asked the Lieutenant Governor whether he had ever “supported a payroll tax.” The Lt. Governor answered “No.” This “When did you stop beating your wife” tactic has been the subject of much crowing from Cruz supporters who accuse the LG of lying.

In fact, the LG was telling the truth and the whole issue is baseless spin, resulting from cherry picking  two words out of hundreds in a Press Release from May 12, 2005, reproduced in part, here: 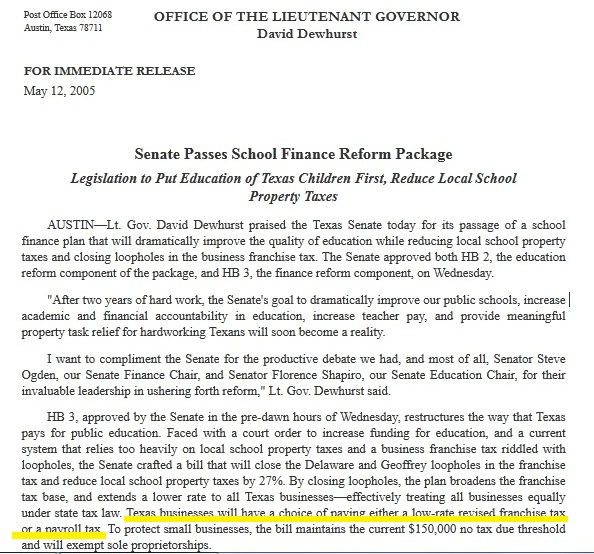 That highlighted sentence says, “Texas businesses will have a choice of paying either a low-rate revised franchise tax or a payroll tax.”

The LG definitely praised parts of HB 2 and HB 3, but the release doesn’t mention “payroll tax” until a brief note in the 4th paragraph about alternatives for calculating the tax owed by the businesses.The word “payroll” is not found in the Bill passed out of the Senate. It is not found in “quotes” in this document, so is not part of a statement made by the Lt. Governor.

The falsehoods don’t stop there. Early last Fall, Cruz has used a Wall Street Journal editorial to blur the line between the Business Franchise Tax and a State “income tax.” Editorials are simply opinion, they are not news reports and are not sufficient evidence of anything except someone’s opinion.

Cruz himself, admitted in New Braunfels last month that the “payroll tax” is in reality a hundred-years-old business tax and that he knows that Attorney General Greg Abbott successfully defended against the claim that it is an income tax on businesses, in front of the Supreme Court last November. Anyone who wants to understand the tax, could just read the AG’s response to the lawsuit, submitted to the Court in August, 2011.

Cruz’ supporters go even farther than Mr. Cruz and claim over and over on Twitter and in blogs that the LG supported or proposed not just a “payroll tax,” but a “personal income tax.”

Neither the “gotcha” question from Mr. Cruz nor this press release is something that the Cruz campaign should have based its criticism on. It certainly is not support for the false claims – beginning in the Fall of 2011 – that Lieutenant Governor David Dewhurst supported either a “payroll tax” or an “income tax.”