About Katrina Pierson for Congress 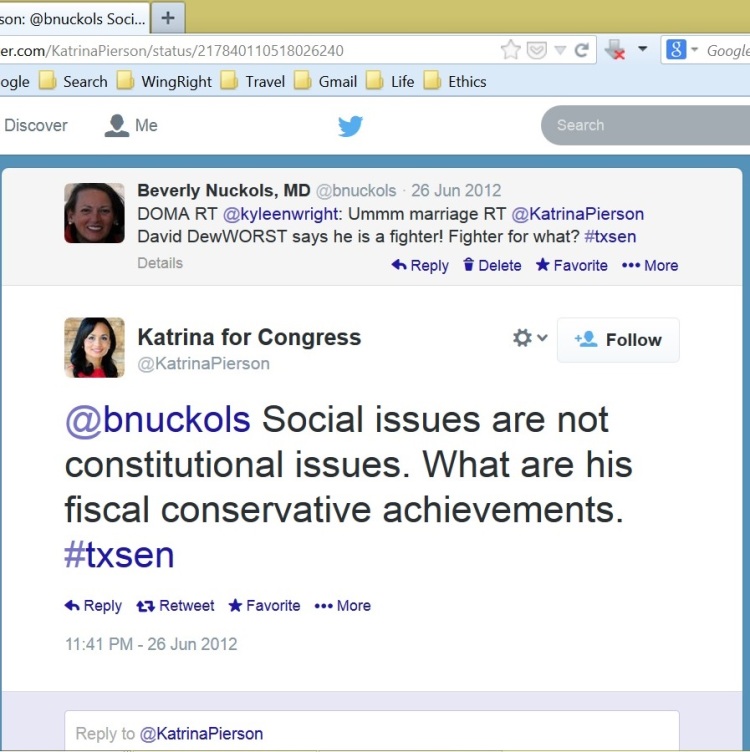 I hope everyone is looking carefully at the anti-incumbent candidates in the upcoming Republican Primary. Not all of them are as conservative as they would have you believe.

Katrina Pierson, who last achieved notoriety when she called an honorable man “deformed” due to his injuries as a Marine in Iraq.

However, few heard about Pierson’s anti-Conservative tweets on “social issues” and “homosexuality” which were the subject of a Wingright.org post a month later, just before the run-off in July, 2012.

(These Tweets are evidently still on her Twitter account, as I downloaded them anew, today, February 16, 2014. I wonder how long she’ll leave them up?)

It’s important that those voting know about how the candidates really feel about the “social issues,” don’t you think?

I’ve asked some supporters of Pierson to speak to her and get her on record as pro-life and pro-marriage, but haven’t heard back from them. I hope before you vote for her, you will ask her yourself.

Conservative Christian Family Doctor, promoting conservative news and views. (Hot Air under the right wing!)
View all posts by bnuckols »
« LOL at the Bill of Rights?
Filibuster: A tool used by the Republican Senate »

6 thoughts on “About Katrina Pierson for Congress”