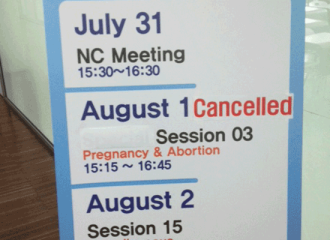 The American Association of Pro-Life Obstetricians and Gynecologists have reported the information and published the women doctors’ planned presentations on their blog.

According to the published official press release (available in Word format) by the President of MWIA, Ghana’s Dr. Afua Hesse, she personally “intervened” to cancel “listed speakers at our 29th International Congress of MWIA who would deny women their basic right to choice.” She further claimed that the presentations had “no scientific merit and threaten women’s reproductive rights and therefore do not belong at our triennial meeting.”

Dr. Donna J. Harrison, an OB/Gyn and member of AAPLOG, was one of the three presenters who found out that their presentations were cancelled only after arriving at the site. The other two presenters were OBGyn Dr. Mary L Davenport, MD, FACOG and Psychiatrist Dr. Martha Shuping, M.D.  After their session was cancelled, Dr. Anna Choi, Chair of the Public Relations Committee of the MWIA 2013 Organizing Committee, invited the three to speak at a press conference.

Canadian Family Physician Dr. Shelly Ross, Secretary-General to the United Nations for MWIA, physically intervened in an attempt to stop a press conference to which the three were invited. Here’s an excerpt from Dr. Davenport’s letter to AAPLOG members about the confrontation:

“They put the three of us up front like a “panel” discussion, and the reporters started asking us questions about our presentation, allowing us an opportunity to talk about what we came to present. About 20 minutes into the interview, the Secretary General of MIWA, a Canadian woman, burst into the room (I kid you not. …and all of this is on camera), and came up to the table and said “What presentation is this? Donna Harrison said “it’s not a presentation”. So she snarled “Why are you being interviewed? At that point, the answers were left to Anna, our host. Anna said that this was a requested interview by the press.

If you’ve never been to one of these big conferences, I’ll explain how they are set up. The tentative schedule is published months in advance. The separate presentations are grouped with similar- or same-topic presentations per “breakout” session, and many separate sessions may be held at one time. In this case, the final schedule of talks and even the signs (as you can see above) had been printed and posted.

I have viewed the three presentations and found them scientifically sound. They’re in PowerPoint format and easy to read, with great graphics and the first, by Dr. Davenport, is excellent and includes the bibliography of her references.